Where Can I Get Tap Shoes?

There are several stores in the area that sell tap shoes, or you can try eBay. Most of the dance stores don’t sell “clogging shoes” – meaning shoes with the double or jingle taps.

Special shoes are not required especially for beginners. Taps can be purchase separately from us on any class night and have them attached to almost any pair of shoes at a shoe repair store. They can also be attached with “Shoe Goo” available at Sports stores. 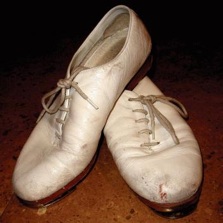 Clogging shoes should have relatively flat bottom soles, without large treads or texture. Tennis or athletic shoes work well, but may need their treads filled with glue before actually attaching the taps. Clogging shoes should be flexible but supportive and should not slip at the heel. Special athletic shoes made for dancing, regular tap shoes and lightweight walking shoes also work well.

Taps come in small, medium and large sizes. It is important that you place the tap correctly so that you get the best fit and sound. If you are planning to glue the taps on, you will want to have a pen handy to mark the outline of the taps on the bottom of the shoe.

The preferred location for the toe tap is the front edge of the shoe. If you are using buck taps, the toe flange should rest lightly back against the toe-tip of the shoe. Draw an outline of the tap on the bottom of the sole.

The heel tap should cover most of the shoe heel but not extend out beyond the edge. Set the tap about 1⁄4 inch in from the back edge for safety to prevent slipping. Draw an outline of the tap.

The recommended product for gluing on taps is Shoe Goo. It can be purchased at Wal-Mart, Big 5, and shoe repair shops. Sets of taps come with round stickers for the rivets to prevent glue from hindering tap action. Place a sticker over each rivet. Following the outline you drew, cover the back of the tap and outlined area on the sole with glue. Press the two glued area together. Use masking tape or fabric strips tied together to hold the tap and sole together. Count on 48 hours (undisturbed) for the glue to set properly. If sufficient glue has been used and fully allowed to set, the hold should be so strong that the only way to get the tap off is to pry it off with a screwdriver or freeze the shoe, making the glue brittle.